The celebration of Afrikaans in Multiple Universes

The South African Centre for Digital Language Resources (SADiLaR) dedicated the month of April to the celebration of Afrikaans as an official language of South Africa. The theme of The multiple universes of Afrikaans was used as the thread that sewed all of the month’s events – that included a webinar, theatre workshop, and main celebration – together. This theme created a platform of growth, development, collaboration and inspiration.

The main event was held on 17 April 2019 at the North-West University’s (NWU) Sports Village. Mr Benito Trollip, SADiLaR’s Afrikaans researcher and organiser of the event, opened the floor with an introduction of the celebration and an overview of SADiLaR. The book prize winner of the University of Johannesburg, Charl-Pierre Naudé, with his novel Die ongelooflike onskuld van Dirkie Verwey, was the keynote speaker of the event. The audience was taken through the chronicles of the novel and had the opportunity to be part of the discussion. Charl-Pierre wants to urge readers to explore and spy during their reading of the book and his presentation inspired those who have not yet read the novel to do so. Quentin Williams then addressed the issue of language activism and non-racist practices in an open-minded and inspiring manner, bringing to light the Afrikaans in the Cape Town region known as AfriKaaps. In a very interesting and relevant talk, Karien Brits from the ATKV introduced the Afrikaans trolls to the audience. Living in the digital era, we are exposed to various platforms and we all have the right to make our voices heard. Karien touched on the positive and negative contributions made on these platforms and the effect of these on language development. “We may live and work in our different multiple universes of Afrikaans, but these worlds intersect and Afrikaans organisations must know about these links to become fully-fledged organisations. Let us be responsible in Afrikaans and promote positive discussions between these multiple universes of Afrikaans.” Prof Ernst Kotzé then had the opportunity to share his knowledge of the development of Afrikaans, especially with regard to the influence of Arabic, taking the audience back to the origin of Afrikaans and the variety of dimensions in which the language is used.

After lunch Prof Gerhard van Huyssteen mapped out Afrikaans in the format of a TV series episode in an exuberant and energetic manner. He demonstrated how the language developed throughout the centuries and emphasised the rapid rate that the language moved forward in the 21st century. He also posed the question whether it’s worth the time (left in this episode) to nit-pick on issues like the use of the Afrikaans term “huidiglik” (currently). Ms Allison Geduld, a lecturer from the NWU Law Faculty, in an inspiring presentation, captured the audience’s attention by giving them a scope of her experience of Afrikaans while growing up in Somerset-East and moving to Potchefstroom. She asked what it means to be Afrikaans and whether it brings a certain ethical responsibility.

SADiLaR is a national infrastructure funded by the Department of Science and Technology as part of the South African Research Infrastructure Roadmap. The centre is celebrating all of the official languages of South Africa by dedicating each month to a language as part of the United Nations’ International Year of Indigenous Languages. The entire month of April is dedicated to Afrikaans – and the multiple universes that speakers thereof inhabit. 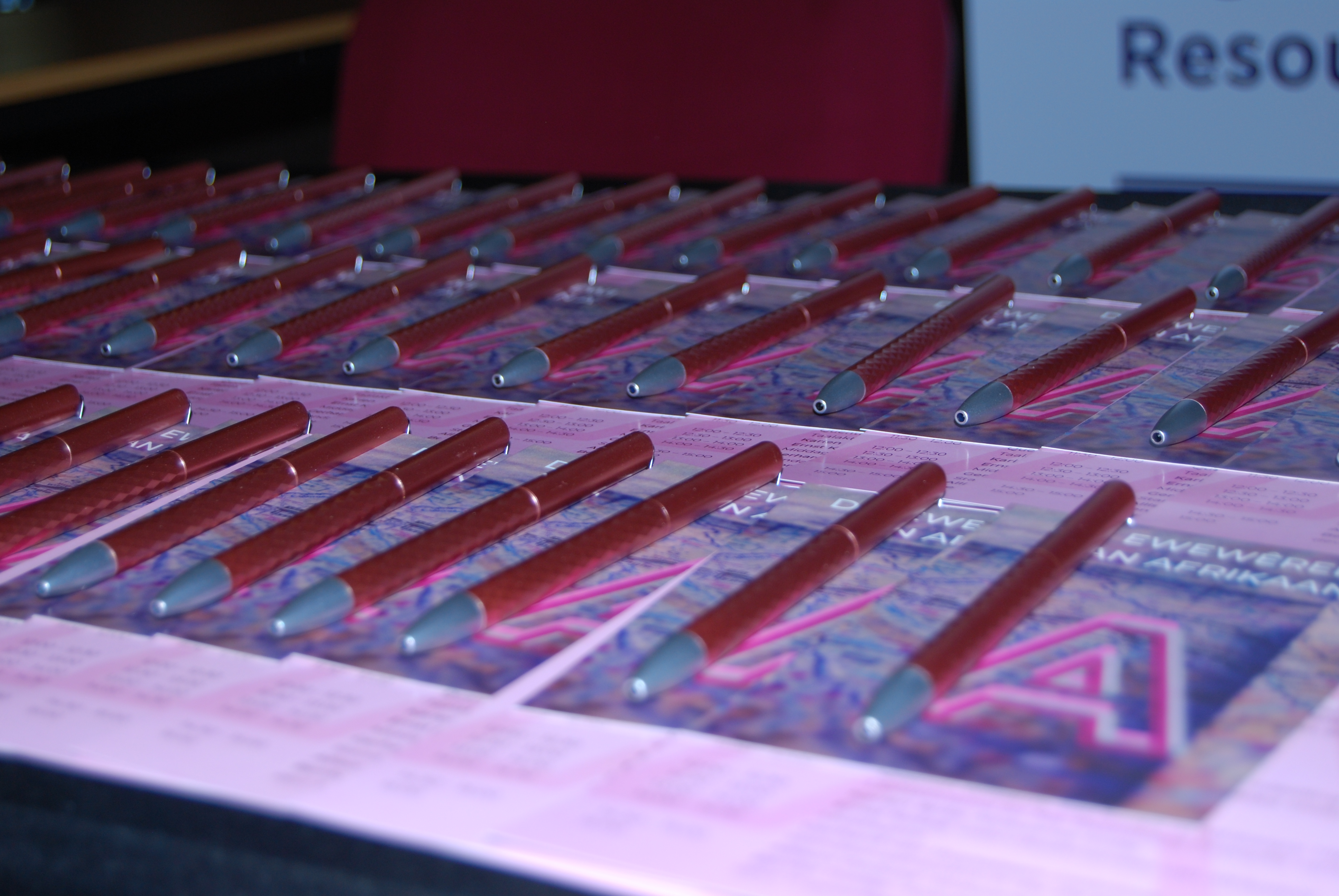 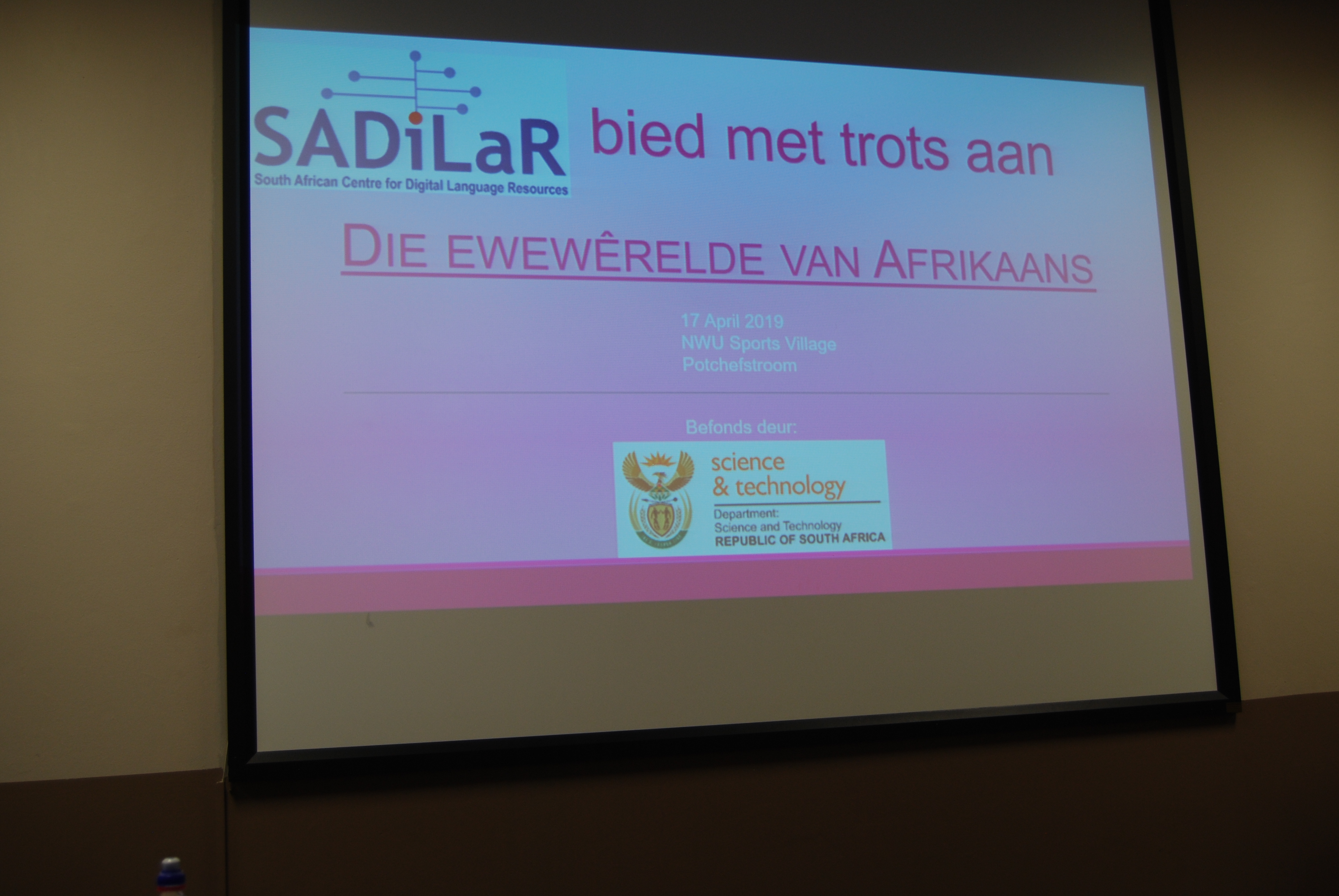 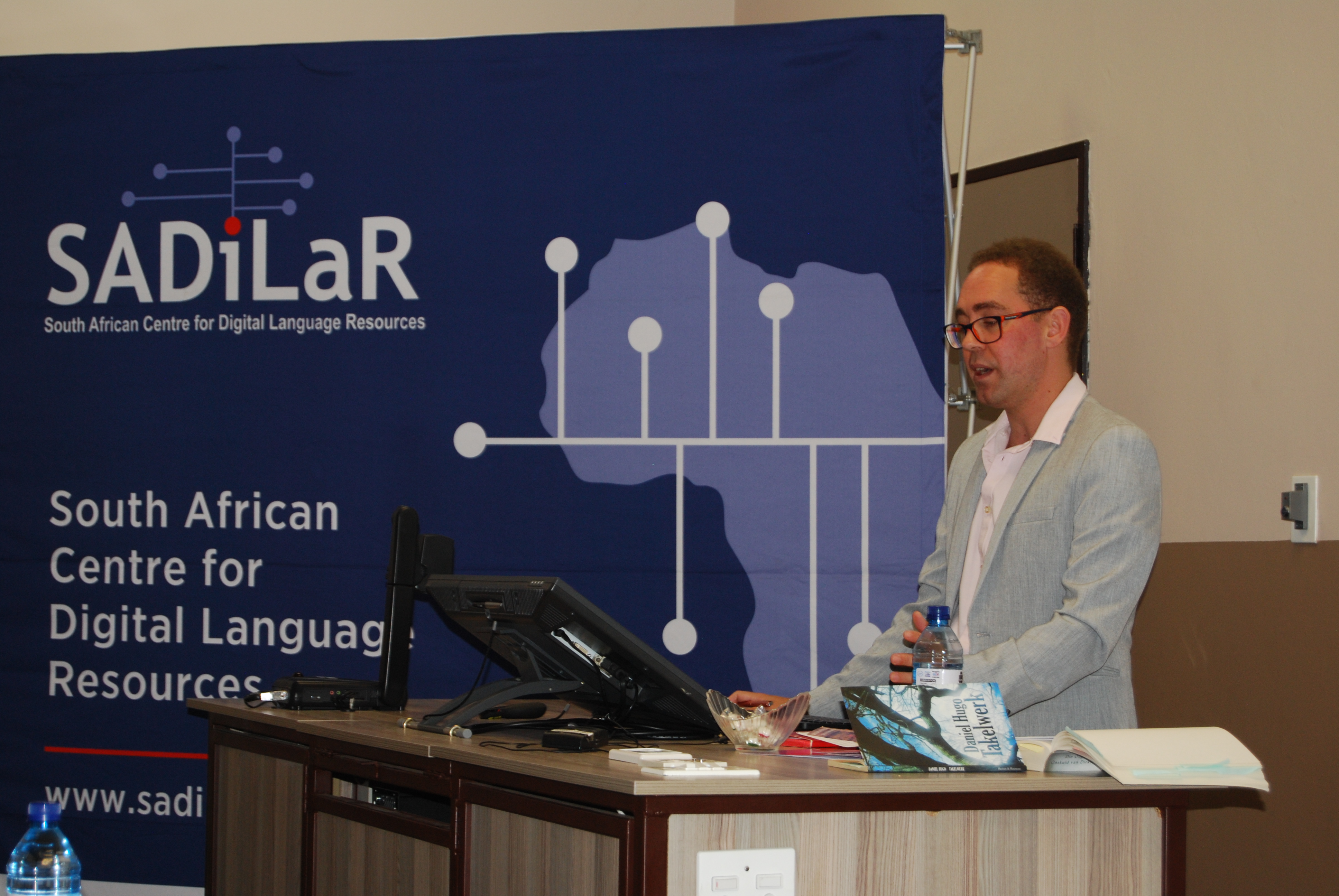 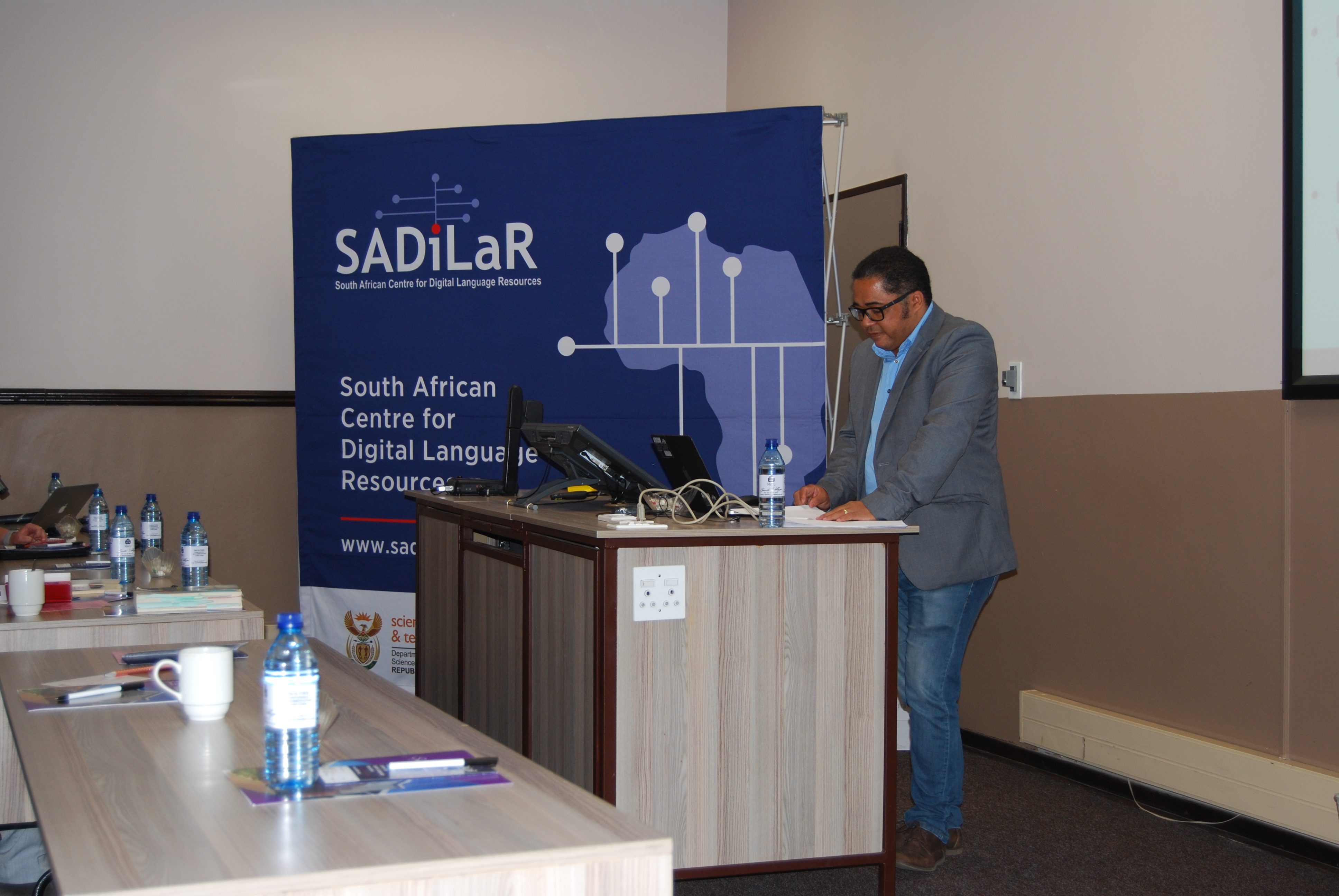 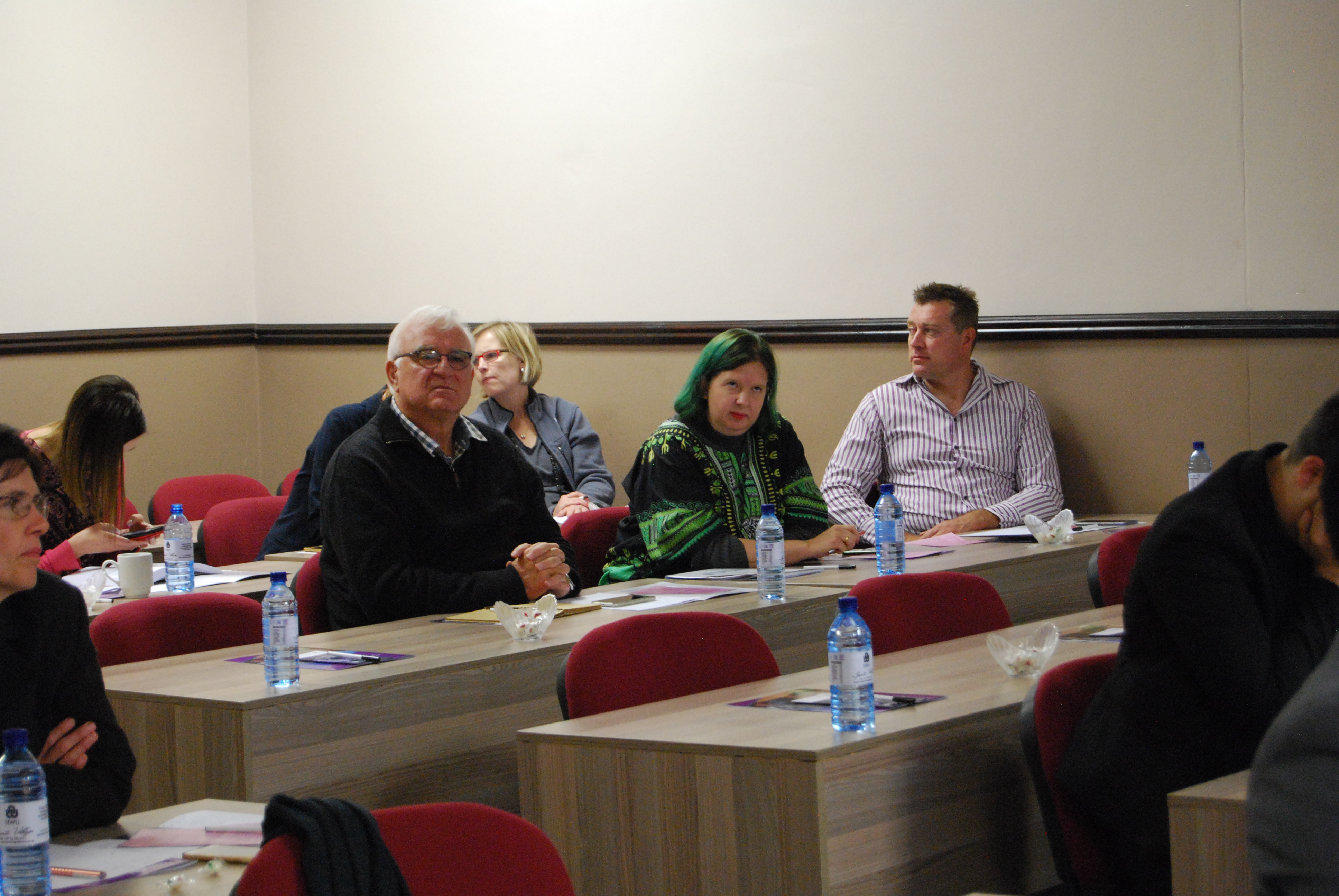 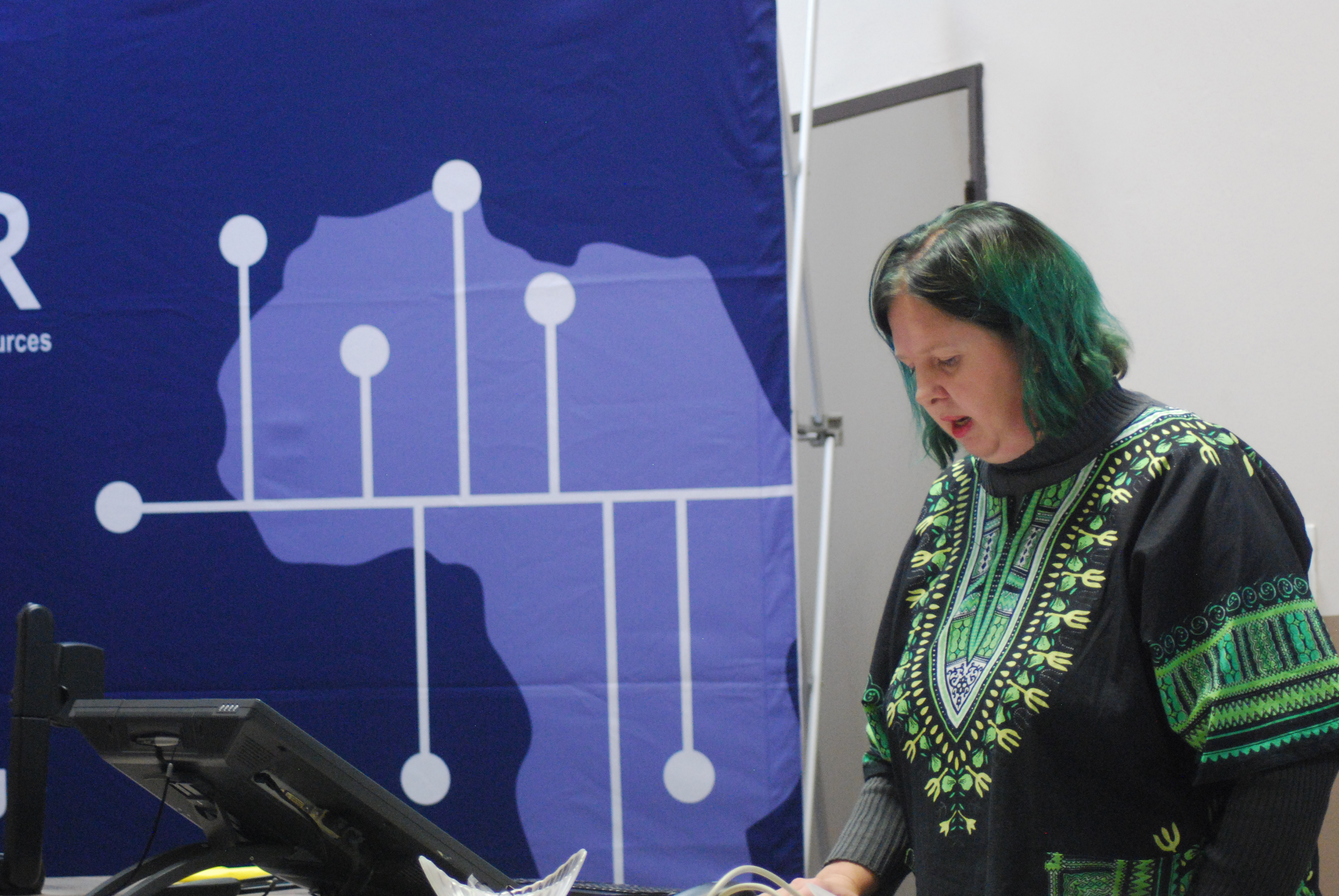 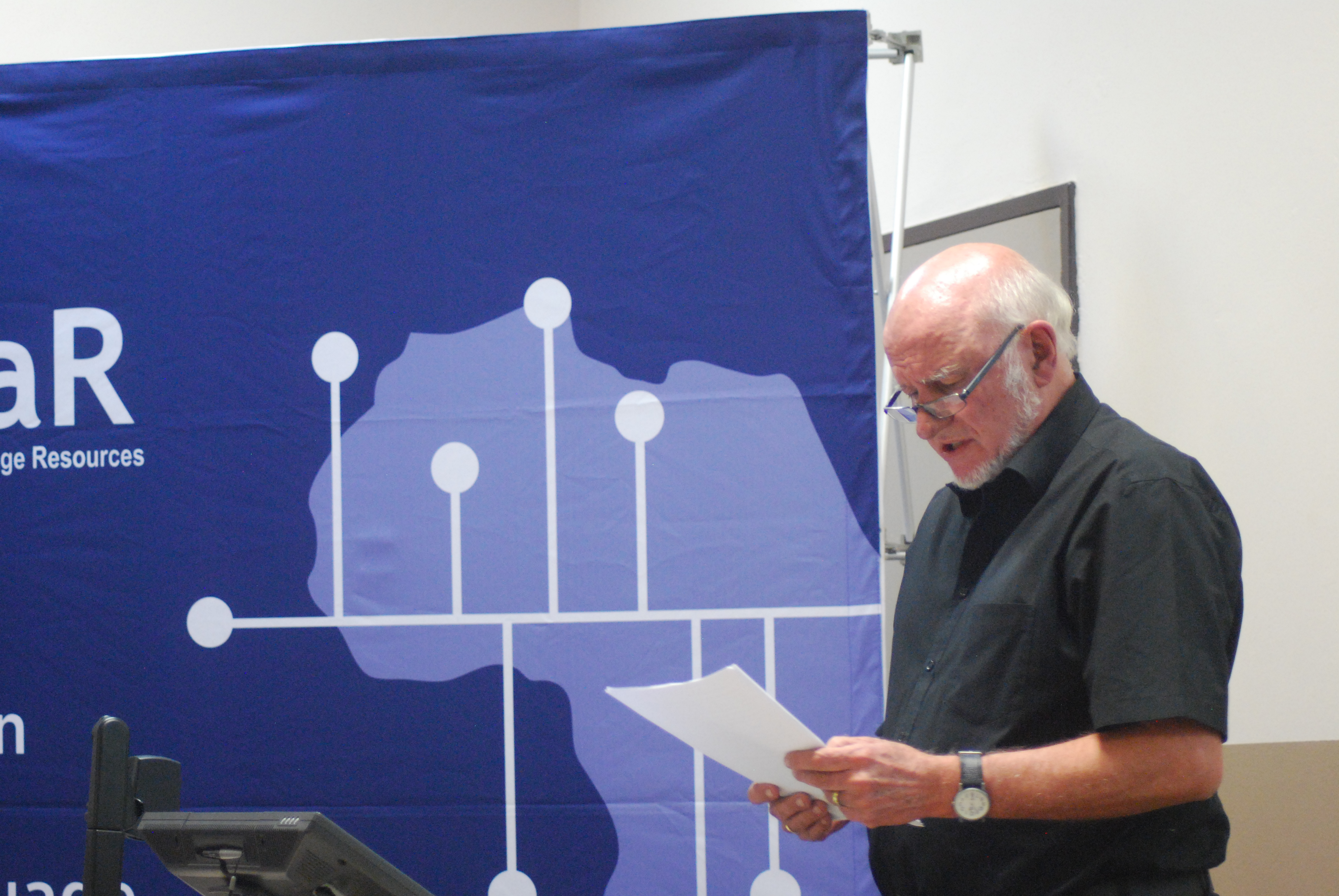 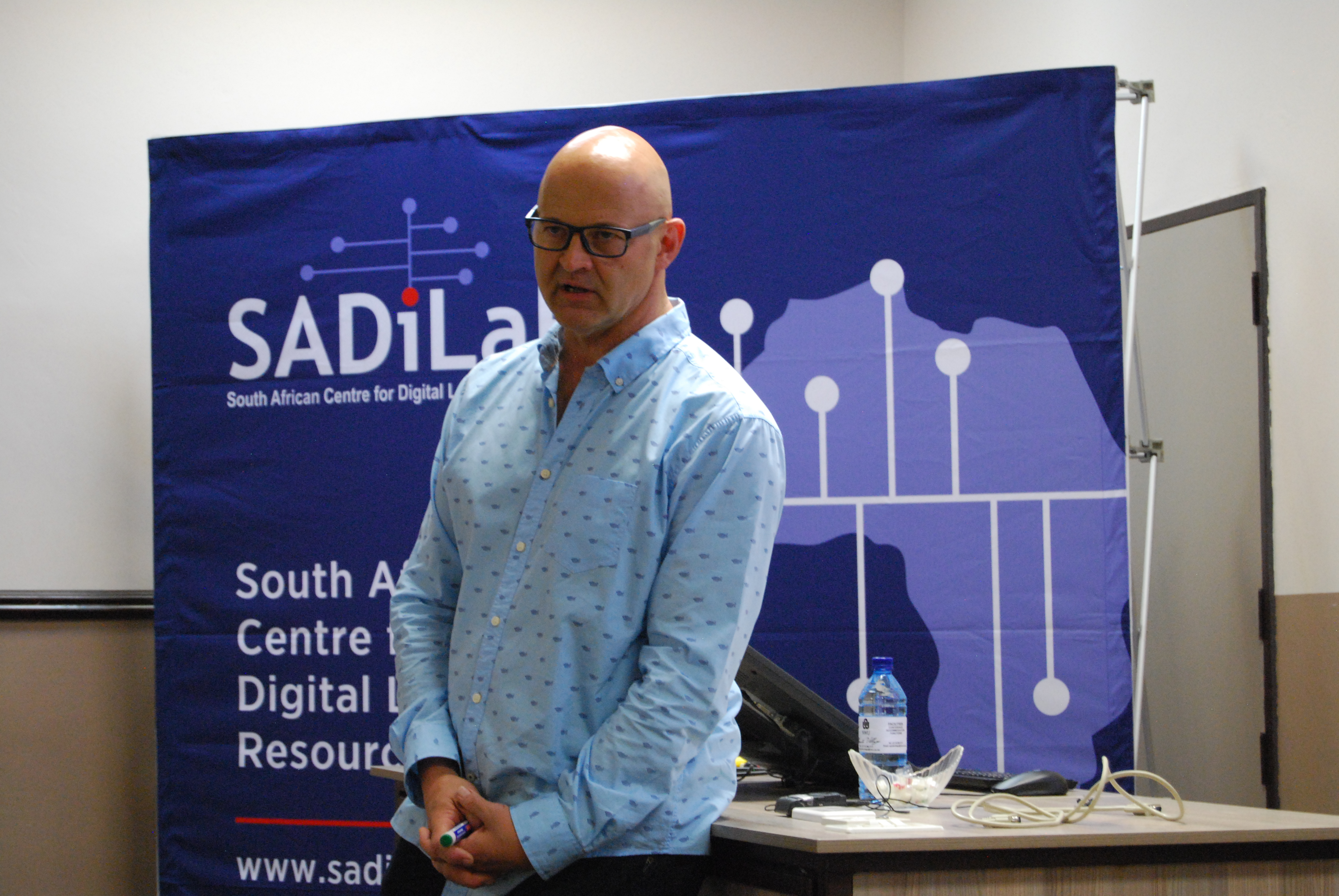 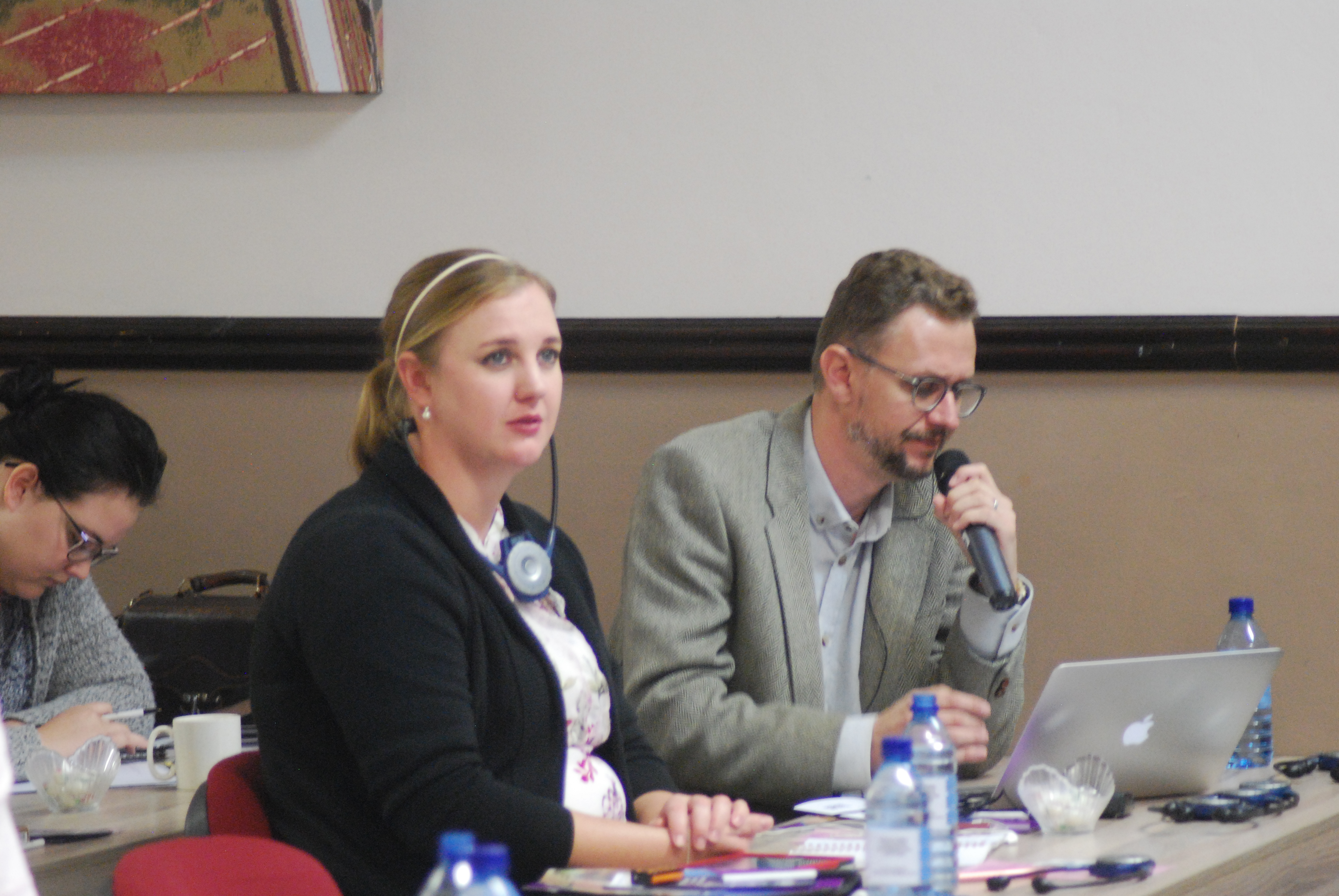 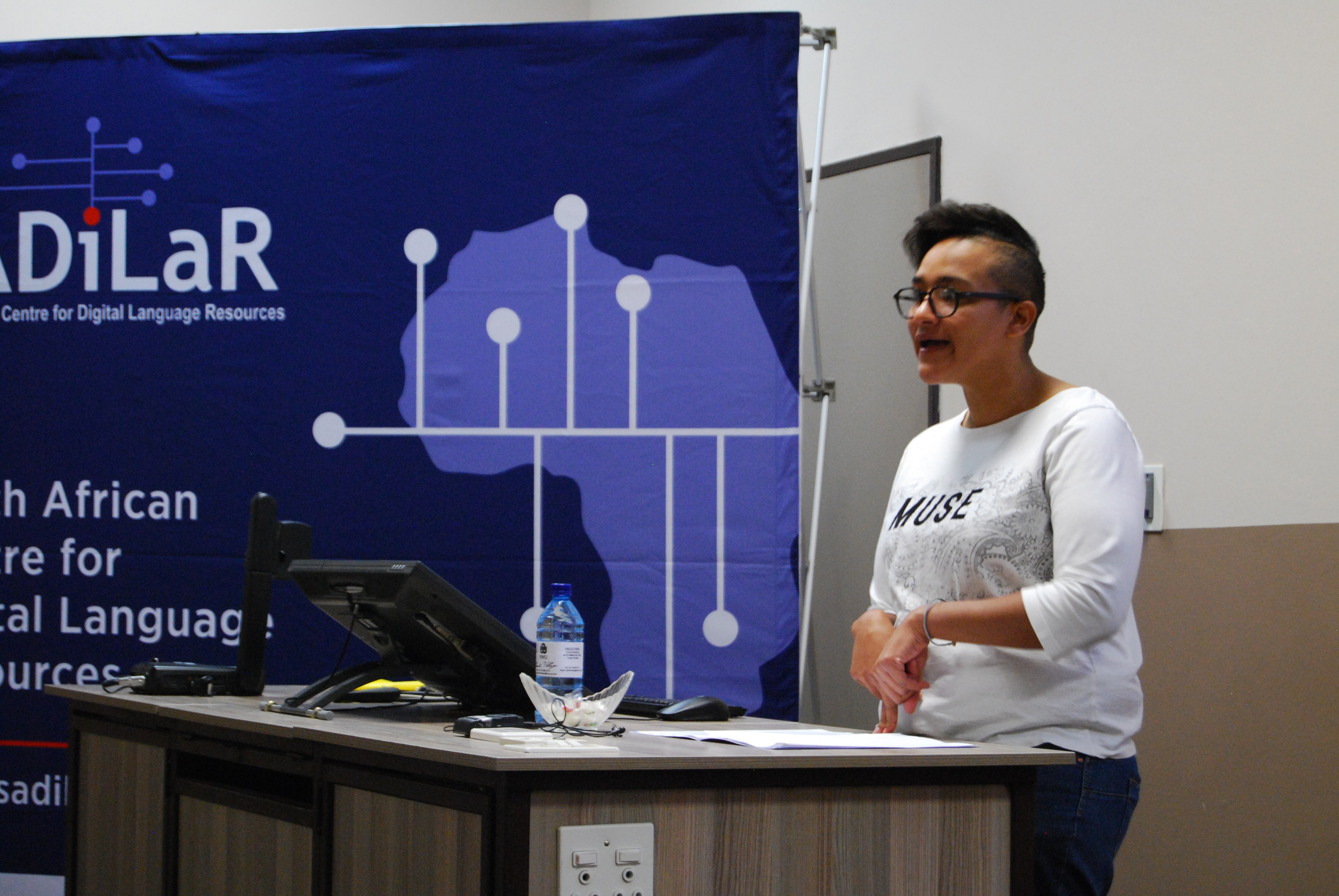