In opposition to the planned changes to the Urban Areas Act, 20,000 women organized a march to the Union Buildings in Pretoria on August 9, 1956. The success of this march demonstrated the strength that women have when they unite. This march demonstrated that women should not be restricted to the home, the kitchen, or to taking care of their husbands and children. But they had more significant social duties to fulfill. These women are sisters, mothers, daughters etc. It is in this spirit that the outstanding ladies of the South African Centre for Digital Language Resources (SADiLaR) set out on their adventure to find lexicons used to describe women. The SADiLaR women also chose lexicons that resonated with them and shared their impressions about them.

Here is a list of the lexicons and their translation equivalents.

Please see blow what each lady said about the lexicons that resonate with them.

I chose the word Kgaitsadi, which means sister. I chose this word because as we celebrate women’s month I have two younger sister our mother was the only daughter, my grandmother was a third born of five girls. We are a feminine family. We lost our mother at a young age but we have kept our relationship solid till now, that is why during this women’s month I celebrate my sisters.

During Women's Month, South African women are reminded of the role that other women played in shaping this country into what it is today. Those women made a significant contribution, and it is now up to us to carry on their legacy. We must pick up where they left off in making this country a better and more liveable place. We can only do so if we, as women, hold each other's hands and support each other as friends, not just girlfriends. While on this journey to make our nation a better place, we meet other women and form friendships with the goal of receiving support from them and, in turn, supporting them to make this journey easier and more bearable. While we are at it, some of our friends fall behind, but we are there to pick them up and remind them of our ultimate goal. This journey will be the simplest if we stick together until the end as girlfriends, women, and queens. We are the force.

In June of 2015 I became a mother to a beautiful baby girl. I gave her the name Mpumelelo, which means success. That is everything I want for her; success. Being a mother made me change the way I think and make decisions about every little thing in life because I know that whatever I decide affects a little girl who relies completely on me. I have made countless sacrifices to try and give her a better life and I am yet to make more. This made me think of the many sacrifices my own mother, and hers before her, has made so that I can have the kind of life I have today. Being a mother made me appreciate my own mother and realize just what a superhero she is! She is a true inspiration and every Women’s Day reminds me of her!

A queen is a mother of the nation. In chess a queen is the most powerful piece that each player has. She is strong enough to lead the nation, cater for the needs of her household while also building her career. She is beautiful, intelligent, energetic and prayerful. She is blessed and has dignity. Her tongue comforts the broken-hearted, she helps those in need, and gives advice to those who need it.

The one who nurtures

The one who sacrifices

The one who soothes

The one who teaches

The one who loves without limits

Because she is love personified

Special thanks to Deon Du Plessis, Benito Trollip, Andrew Liabara and Respect Mlambo for their assistance in compiling these lexicons. 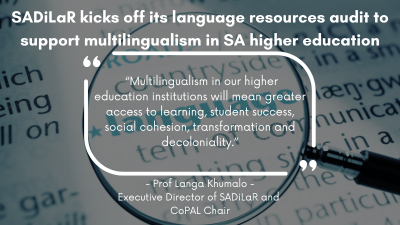 “Language continues to be a barrier to access and success for many students at South African higher education institutions,” notes the the Department of Higher Education and Training (DHET) in their revised Language Policy Framework for Higher Education. This policy framework emphasises the importance of developing multilingual environments at South Africa’s public higher education institutions as part of an ongoing effort to remove barriers to access and success in higher education in our multilingual society. SADiLaR is pleased to be working closely with Universities South Africa (USAf), through its Community of Practice for the Teaching and Learning of African Languages (CoPAL), to support the higher education community in the effective implementation of the framework.

The policy framework was promulgated in 2020 for implementation in 2022, and mandates that universities and Technical and Vocational Education and Training (TVET) colleges begin to take tangible steps to develop all South Africa’s 11 official languages as languages of scholarship, teaching and learning and administration.

While there is flexibility in how institutions achieve this, the policy is unambiguous in the statutory expectation that they work towards the goal of having all South Africa’s languages function equitably across the domains of higher education, including teaching and learning and administration.

The Language Resources Audit as a step towards implementation

SADiLaR, established as a dedicated research infrastructure under the South African Research Infrastructure Roadmap, is uniquely positioned to support higher education institutions in the development of strategies  that will enable access to resources that are required to implement the policy. SADiLaR’s mandate is to stimulate and enable digital research and development of all South Africa’s 11 official languages, with a focus on those lesser resourced languages.

“Implementation of this framework will require significant resources, these include language technologies like grammar editors and spell checkers, language terminologies for academic disciplines and special skills and expertise to support multilingualism,” says Khumalo. “Without these resources and a way for institutions to pool resources and share strategies and expertise, this framework will be a non-starter.”

For this reason it was decided at the USAf - CoPAL Vice Chancellors Colloquium on the New Language Policy Framework for Higher Education, hosted by the University of Stellenbosch in September 2021 that SADiLaR should conduct an audit across the higher education sphere to identify what resources are available to institutions in order to successfully implement the new policy framework.

This audit will begin later this month with two pilot visits, first to the University of Kwa-Zulu Natal and then to North West University, then it will be rolled out to all 26 universities of South Africa from August 2022 until March 2023.

The goal of the pilot visits is to begin to lay the groundwork for the audits.

“At this stage,” explains Lebogang Boemo, Project Manager at SADiLAR, “we will be engaging with management, staff and students of the different universities to get a view of the progress that universities have made towards the implementation of the DHET’s New Language Policy Framework for Public higher Education Institutions.

“The goal of the language audit is to get a sense of what is available, what is the state of the art across the academy,” says Khumalo. “Then we can begin to develop a strategy to fill in the gaps on the one hand, and ensure that we effectively use the resources available across the academy, so that no institution gets left behind.” 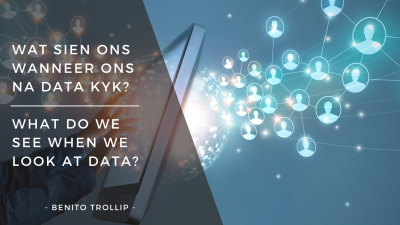 What do we see when we look at data?

The world is flooded with data, those snippets of information that somehow find their way to your conscious or subconscious. It could be the news reports you monitor throughout the day, your heart rate according to your smart device, or even the new word and its definition you discovered today. My word for the day is bezant – a Byzantine gold coin. Ultimately data is a very broad concept and language data is the specific type of data I work with the most – why do certain words occur in certain places? Or why does the word not appear in certain places? Does it occur more or less than in the past? What does the word mean in this particular context? I often have to ask myself what the numbers and words mean and where I get my information from, because unfortunately I cannot just say what I want to, even though I want to be right and confirm all my own (smart) predictions. Apart from all of the data that I discover, it is also important to know that other people quite possibly have other data and there is essentially this ecosystem of data and interpretations that exist at the same time.

A skill that becomes increasingly important precisely because of the abundance of available data, is questioning the data that you (want to) use or want to create yourself. One should always ask where data comes from, why did the relevant organisation or individual collect this data and if you want to reuse it, is it suitable for your own purposes? Are there conditions attached to its use? A curious attitude about data and possible gaps therein offers opportunities to contribute to a conversation or elucidate human knowledge about phenomena.

In the end knowledge and insight are created by interpreting data – what on earth do all these words, graphs, numbers and formulas mean? Data does not have inherent meaning, somewhere people create meaning and it remains crucial to always keep this in mind when data is involved. 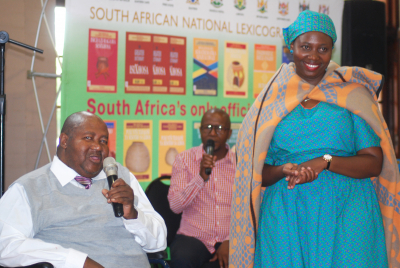 The President of the Republic of South Africa honors Dr Maphalla

In the past few days, The President of the Republic of South Africa, Mr Matamela Cyril Ramaphosa, honored Dr Maphalla with the (golden) Order of Ikhamanga  as an evidence of the wonderful and excellent work that he did in the advancement and maintenance of Sesotho. This golden honor of Order of Ikhamanga is the highest, special honor, that is given to South African residents for manifesting capabilities and exceptional excellence in the fields of art, tradition, literature, music, journalism and sports, who have dedicated themselves to their country. Dr Maphalla was given this honor because of his excellent work in Sesotho literature, as well as the profound role he played among the Basotho nation. He definitely deserved this honor.

You will recall that in 2019, SADiLaR honored Dr Maphalla for the excellent work he has done, and we were delighted when we received the news that the President of the country deemed it appropriate to honor this Sesotho giant.

Dr Maphalla wrote plays, poems, dramas, short stories, and others and received many honors which showcase his talent and capabilities. Some of the books he wrote are read at schools, and some of them that quickly gained popularity include Tshiu Tseo, Tshepo le Metswalle, Tefo, Kabelwamanong, Nna ke Mang? Botsang Lebitla, and many more.

Like SADiLaR, we congratulate Dr Maphalla for this honor. Although God recalled him, but his works are evident, they cannot be denied and are unique.